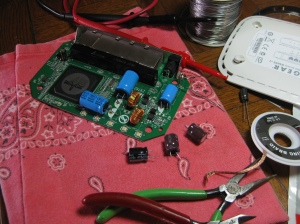 A few weeks ago we had a serious storm here in the SF Bay area and the power went out for about 5 hours.  It took a few days for me to realize that the internet connection was running pretty slow, so I started trying to trace it.

I’m using Comcast IP service and right out of the cable modem I was getting 21Mbps (using the Speakeasy speed test).  After the first Netgear gigabit switch the bandwidth dropped to about 3.g Mbps and after the second, it dropped less than 1.0 Mbps.  Killin’ me!

So after some Google searching I found that the Netgear GS605 v2 was susceptible to power surges which often happen during or after power outages.  The problem is apparently in the poor quality capacitors used.  Once replaced, they are back to full force with less than $10 worth of parts and about 20 minutes.  Here’s how I replaced the capacitors.

On the bottom there are some rubber feet that can be peeled back to reveal tiny torx head screws (from my set I used a T8).  Unscrew the 4 screws.  The PC board is not secured further, so when you remove the back, you can jiggle the PCB and it will come out as a single unit.

On the PCB you can see 4 capacitors:

To remove the capacitors, I first tried using one of those solder sucker tools but I think my soldering iron it not getting hot enough.  I basically put some side pressure on the exposed post oposite the capacitor side of the PCB and when the solder melted, the capacitor slipped out at an angle.  Doing the same on the other post released the capacitor.  I removed the 2 1000 uF caps and the 470 uF cap.

I went to Radio Shack and purchased:

The replacements from Radio Shack were their generic versions, bigger in size and higher in rated voltage but I wanted to get it done and not wait a few days for an online order.

Because the new capacitors were so large, I had to mount them sideways. on the PCB.  This is generally straight forward if you pre-bend the leads.  Put the cap in place and with needle nose pliers, pre-bend at the appropriate lengths.  The 1000 uF cap closest to the edge needed to be bent with the leads in a slightly overlapping form, but once you get in there it should be obvious.  Here’s what it looked like. 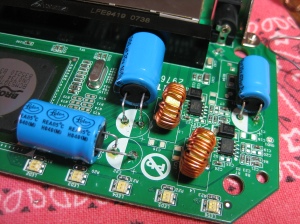